Mosquitoes are more than annoying. They can transmit dangerous diseases. With that being said, you’ll want to do your best to kill those pesky mosquitoes around your property. There are numerous ways to achieve this goal. However, you may want to use a bug zapper racket because it looks look and you’ll get a bit of a workout. Before buying a bug zapper racket on Amazon, you’ll first want to learn about these products.

You’ll find out that Amazon is making a killing thanks to these bug zapper rackets and you’re paying far too much.

They look different but there is a good chance that they’re coming from the same source. The Zap It! Bug Zapper is being sponsored on Amazon meaning the seller is making money from the advertisements. The 3rd party seller is WebDealsDirect. This seller is peddling the Bug Zapper, Spacesaver Premium Vacuum Storage Bags, Flexi Hose, and Pet Union Professional Dog Grooming Kit.

The Faicuk 2-Pack Zapper is being shipped by Amazon but sold by FAICUK. This individual is selling a handful of products that carry the Faicuk name including Dual-Sided Yellow Sticky Traps for Flying Plant Insect, Clear Window Fly Traps, Moth Traps, Squirrel Trap, and others.

When you buy something on Amazon, you should expect the prices to be higher. On Amazon, the seller fees are outrageously high. For a $20.00 item, you’ll pay $3.90 as a professional seller. As an individual seller, you’ll pay $4.89. So, all items from Amazon 3rd party sellers are going to be significantly higher on Amazon than on their websites. Or, they should be unless you’re being scammed.

Nevertheless, you expect to receive high-quality products at decent prices. To find out if Amazon is offering decent prices, it is important to find out where the ZAP IT! Bug Zapper is coming from and we don’t have to look far. All we have to do is head over to Alibaba and search for bug zapper racket.

Here, we’ll find an identical product called “The high quality electronic mosquito killer bat fly swatter Handheld Bug Zapper Racket” which is being sold for $1.89 apiece. Yes, you read that right. This product is being sold for $1.89 apiece. One product on Alibaba is called the “Amazon bug zapper led battery powered insect electric mosquito racket”. So, the entire purpose of Alibaba is to buy these low-quality products and sell them at higher prices on Amazon.

Another Zap It replica is being sold for 98 cents apiece.

How Much Are They Making?

They don’t have shipping to worry about since the seller is allowing Amazon to handle that. They have to since they’re likely located outside of the United States. As a result, a 3rd party seller can make as much as $16 apiece selling 2 ZAP IT Bug Zapper Rackets. Amazon is making roughly $3.25 with each transaction.

The ZAP IT! Bug Zapper Twin Pack has 3,698 ratings on Amazon. We are skeptical about this but we’re going to use this number to find out how much Amazon has made by allowing these Alibaba products to be resold at greatly inflated prices. If Amazon is making $3.25 from each transaction, it would have earned 12,018.50 after 3,698 transactions.

As for the 3rd party seller, they would’ve earned a little more than $59,000. It is staggering to think that these profits are coming from junk products being imported from China via Alibaba.

Right now, Zapitproducts.com is being operated by Web Deals Direct LLC. This is one of the main 3rd party sellers of the Bug Zapper on Amazon. On its website, it says Web Deals Direct LLC is headquartered in Harrisburg, NC but the contact information says 25871 Atlantic Ocean Drive Lake Forest, California 92630.

Which is true? Web Deals Direct LLC is registered in North Carolina with the address being 8543 Twickenham Terrace Harrisburg, North Carolina. The address has been linked to several other online stores including PetTechProducts.US. Unfortunately, a lot of people have been given the runaround by PetTechProducts.us. The same individual is involved in PetUnionProducts.com. 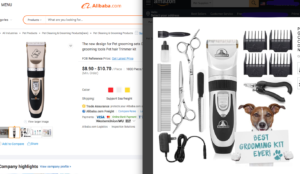 While Web Deals Direct has a B rating with the Better Business Bureau, it has a lot of unresolved complaints. One complaint from 9/10/2019 says that they’ve been unable to contact the company in regard to their “lifetime replacement guarantee”. Another says that the space saver bags were faulty. 7 of 20 bags leak and will not compact.

This customer called, emailed, and got one response but nothing came of it. Most of the complaints are associated with the company’s “lifetime replacement guarantee” that seems to go unfulfilled.

Unfortunately, the products being sold by Web Deals Direct are significantly cheaper on Alibaba. A $29.99 Pet Union Dog Grooming Kit can be found on Alibaba for less than $10.

Sadly, Web Deals Direct claims to manufacture its own products but this likely is not the case. By checking ImportGenius, we can see that Web Deals Direct LLC has received more than 520 shipments over the years. Most of those shipments are coming from Chinese companies including Jiangyin Europtronic Stationery Co, Chaozhou Xiangqiao HongChaung, Cixi Landsign Electric Appliance Co, YIWU Comeon Household Goods Factory, and others.

All of these companies are importing their products from China and selling them on Alibaba.

Without Amazon, None Of This Would Be Possible

Thanks to Amazon and the company turning the blind eye, shady companies like Web Deals Direct and others have made millions while selling shoddy products to American consumers. It is impossible to recommend shopping on Amazon when it allows its platform to be flooded with cheaply made, Alibaba imported junk. It is even harder to trust Web Deals Direct when the company claims it manufactures its own products but receives shipments from Alibaba suppliers.

We would personally buy the product from Aliexpress before buying it from Web Deals or Amazon. Why should we pay more to give a rich individual even more money? These products are significantly cheaper on AliExpress so it is best to give our money to the Chinese this way. The same bug zapper can be purchased on AliExpress for $4.69 and $2.77 for shipping.

I do not like Adam Feinberg or Jeff Bezos enough to give them an extra $16 for nothing.