When an item on Amazon says it is shipped by Amazon, this means it is being stored in Amazon’s warehouses. When someone buys one of these products, Amazon’s workers will package it and send it to the customer. The Amazon seller ships their products to Amazon and pays the company storage fees. This means that Amazon has the opportunity to inspect these products for quality and counterfeits. It doesn’t do that.

Instead, it is complicit in the scheme. Without Amazon’s warehousing services, sellers of counterfeit products in China, India, and elsewhere would have a more difficult time handling American shipments. Thanks to Amazon, countless individuals can sell bad products to American consumers because Amazon will handle most of the world for them.

With that being said, amazon’s WiFi extender market is overloaded with bad products. Below, you’ll find a list of brands selling the exact same wireless WiFi repeater on Amazon. Since they’re shipped by Amazon, Amazon is taking the risk. We’ll learn more about this below.

Don’t take our word for it. Head to Amazon and search for “wifi range extender up to 300mbps repeater”. You will find a handful of products that look identical. The only major differences are the price and the brand. 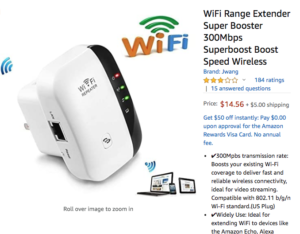 The majority of these products are being shipped by Amazon. Why? Well, the seller is based outside of the United States so they let Amazon handle shipping the product to buyers.

Why are there so many WiFi extenders that look and operate identically? They’re the exact same product. All you have to do is search for these products on Alibaba. On Alibaba, the product is being sold as the “Fast Wifi Booster 300M Wireless WiFi Repeater 2.4G wifi range extender”. More importantly, the product can be purchased for less than $6 apiece.

Look at the pictures and you will see that this is the exact same product being sold by the aforementioned brands on Amazon. These repeaters are supposedly being manufactured by Shenzhen Jiuniuba Technology Co. Ltd. From China. 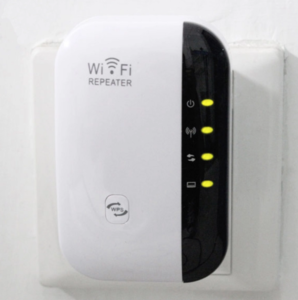 According to its Alibaba profile, the company was established in 2015 and is based out of Guangdong, China. One of its most popular products is the WiFi repeater which is the subject of this article. Another product being sold by this company is the “direct sell 300mbps 802.11n home use wifi router”. Once again, this same exact router is being sold by several brands on Amazon.

Is The Multi-Branded WiFi Extender A Scam?

It is really difficult to trust any of these Amazon sellers. MakeTheOne, Aigital, and the others are simply buying cheap products on Alibaba/AliExpress and having them shipped to Amazon’s warehouses. The products are listed on Amazon with the prices increased by as much as $20 or more. When an American unfortunately buys one, Amazon ships it to them and MakeTheOne or Aigital makes a lot of money.

Depending on the specifics, they could make as much as $15 a pop. That adds up very quickly. Amazon has let these scams become so massive that Aigital and others now have branded stores on Amazon’s website. Do they make products? No. Are their products overpriced junk from Alibaba/China? Yes. Nothing is protected by copyright laws so another individual can always come along and do the same thing.

This is why there are 10 of the same item. Furthermore, it should be noted that these products are just not going to work. There is a reason they have 100s of 1 star ratings or even more. These products are not worth the money considering you can get them a third of the price on Alibaba or elsewhere.

Unfortunately, Amazon is harboring loads of scammers like this. And, they’re doing their best to protect their seller feedback as well. When feedback is crossed out on a seller’s page, it means that Amazon took responsibility for it. The negative feedback will not hurt the seller’s metrics. Amazon normally only removes this type of feedback when it has something to do with shipping and Amazon handled the shipping.

As an example, this customer, Mark Draper, says that the “Shipping was fine. The adjustable belt is not very adjustable. I’m a 36” waist and it doesn’t fit”. Why would Amazon remove this feedback? The complaint has nothing to do with shipping. Another says, “No good for iPhone X with Otter box”. Once again, Amazon crossed out the feedback making it useless.

Why You Shouldn’t Buy One Of These WiFi Extenders

We believe that there are numerous reasons to stay away from these WiFi extenders. For starters, you should see the number of angry customers. Countless people have left bad reviews for these products on Amazon because they’re garbage. They simply do not work or they work for a few weeks and malfunction a short time later.

Furthermore, trying to get support from these sellers is nearly impossible. They’re located outside of the United States putting them on a completely different timezone than you. You might get a refund if you’re lucky but that’ll probably come after an Amazon A to Z claim. Who wants to go through that headache?

Finally, you can get the same WiFi extender on Alibaba for about $5. If you want shipping from the United States, you’ll pay $13.50. Or, you can get a slightly different model with two antennas for $10.78. Why would you pay $20.99 for the Aigital WiFi Extender when you can get it significantly cheaper elsewhere?

This makes it nearly impossible to justify buying one of these WiFi extenders from Amazon. Buying a legitimate name branded product is a different story.

When an item is returned to Amazon, the company will try to determine if it is sellable. If the item is sellable, it will be returned to the 3rd party seller’s inventory. If it not sellable and Amazon feels it was responsible due to shipping problems, it will remove the item from the 3rd party seller’s inventory and will reimburse the seller for their loss.

This is why so many items are being added to Amazon’s Warehouse Deals. Items such as these WiFi extenders are sent back at alarming rates. Customers say they’re defective because they’re garbage and do not live up to expectations and promises. As a result, the 3rd scam seller is reimbursed by Amazon and Amazon attempts to sell the defective item through its Warehouse Deals.

On Amazon, the cheaper Aigital WiFi Extender in the Warehouse Deals is $18.47. This is still significantly higher than what you’re going to pay on AliExpress. This is funny considering how Amazon loves controlling its 3rd party sellers and forcing them to push their prices lower with “potential high pricing” errors.

On AliExpress, we can get a brand-new junky WiFi extender for $13.46. We can get a used one from Amazon’s Warehouse Deals for $18.47. Shame on Amazon. These junk products should be taken out, crushed, and used for scrap pieces at Amazon’s expense.

The company is likely losing hand over fist anyway since it cannot get rid of these products. Even when it does sell them, they’re likely returned later. There are tons of these WiFi extenders in Amazon’s Warehouse Deals and the company will likely never get rid of them.

There are 10 used offers for one Super Boost WiFi extender and 7 for the Superboost WiFi Extender. Amazon reaps what it sows by allowing its platform to be overrun by scammers.

The Moral Of The Story

Sadly, we used to love Amazon but the company hasn’t maintained the levels of honesty and integrity it once had. The fact that it is turning a blind eye and allowing so many scam 3rd party accounts to sell these faulty, junk products on its platform is sad. It is even worse when the company is proudly selling them in its Warehouse Deals. It may pretend that the Warehouse offers great prices on slightly damaged products but this isn’t the case.

AliExpress is still cheaper and you’re going to be disappointed either way. This is just another reason to run for the hills and drive 50 miles into town when you need to buy something. At least you’ll know what you’re getting that way. If you must buy a Wi-Fi extender on Amazon, please stick with a reputable brand. With TP-Link and NetGear, you’ll at least get some customer support.