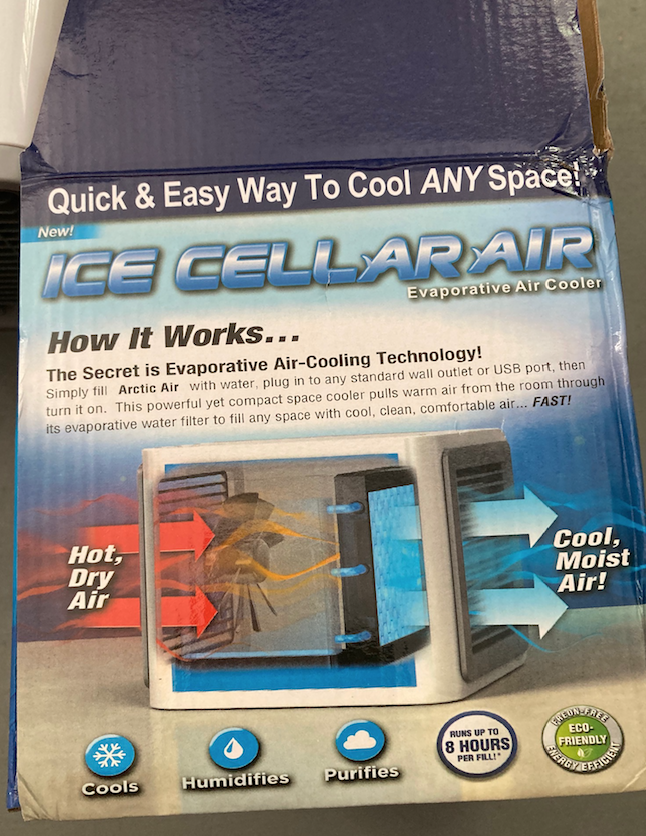 With the summer weather heating up, consumers across the United States are desperately searching for ways to stay cool. Since many shop on Amazon, they’ve started looking for portable air conditioners on the platform. While some may provide satisfactory results, many will not. In this particular category, Amazon’s offerings are overloaded with Chinese-imported junk. In this guide, we will dig deeper into Amazon’s portable air conditioner market and how the company has helped Alibaba and AliExpress drop shippers turn an idea into a full-fledged business.

As seen on TV products are always exciting but it is tough not to be skeptical. Those late-night infomercials advertising the Arctic Air have likely gotten you interested in these products. You watch as the man on the television pitches the product and explains how it wonderfully cools a small space. Who doesn’t want to use a compact air conditioner that allows you to avoid cranking on the air conditioner and sending your electricity prices higher?

Now, you’re ready to buy one and try it out for yourself. Should you? Will you be satisfied with one of these portable air conditioners and humidifiers? Nayzayerz recently got its hands on one of these products. In this article, we will cover the product’s performance and tell you what you can expect from the Arctic Air and similar alternatives.

Truthfully, most people are not going to buy products they’ve seen advertised on television. Most are skeptical of these products and won’t buy them. However, Amazon has opened the door to these Chinese-made products. When searching Amazon’s products, you’ll find a wide assortment of portable air conditioners from an array of brands. There is the NEXFAN Portable Air Conditioner, VOSAREA Personal Air Cooler, GREATSSLY Air Conditioner Fan, HOMFUL Personal Air Conditioner, and the Geoheoo Air Cooler. 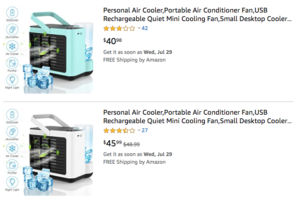 The list goes on and on. The prices vary widely but the setup is mostly the same. The devices are compact, lightweight, and expensive. Most come with the same features. For instance, they are described as quiet. They have night lights and they work as an air cooler, fan, and air purifier. Most are powered using a USB cord.

While you may believe that your options are plentiful, they’re not. They use different brand names and the designs may be slightly different. However, these products are mostly one and the same. It doesn’t take a genius to see that the products are mostly identical since they use the same pictures. The GDMONIN Portable Space Air Conditioner is mostly the same as the HALOFUN 2020 Upgraded Air Conditioner Fan.

How Do They Work?

We recently purchased one of these portable air conditioners with the sole intention of testing it out so you won’t have to. We found that they’re fairly simple in terms of design and construction. These “air conditioners” feature a small computer fan in the back and a water pan at the bottom. The user will add water to the tank and it will be transported to the pan at the bottom. 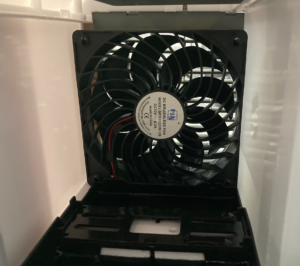 With chilled water or ice water, the fan should blow cold air out. It seems like a very good idea but the execution is not great. Since you’re relying on a computer fan to cool a small space, it simply isn’t powerful enough. Step a few feet away from the “AC” and you won’t feel a thing. A medium-sized fan will always outperform these “portable air conditioners”.

We are putting quotations around air conditioners because they’re not. They’re nothing more than a small fan with a few pieces of fabric pretending to be a filter. 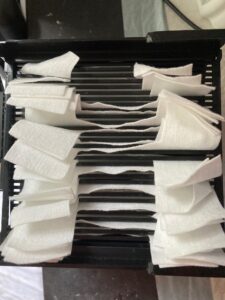 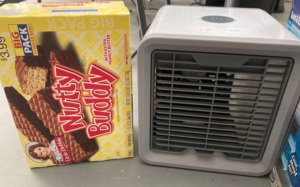 Do the portable air conditioners being sold on Amazon work? They do work but not nearly as described. They will turn on. The night lights will likely work perfectly. The fan will turn and push out a little cold air. Unfortunately, you’ll probably be dissatisfied with the end results. The problem is that the fan is not powerful enough and the water system doesn’t make a difference.

When testing our Arctic Air alternative, we really couldn’t tell a difference. When sitting two inches from the fan, we could feel some air being pushed in our direction. Otherwise, the unit isn’t powerful enough. Adding ice and cold water didn’t help.

In an Amazon description for one of these portable air conditioners, it says that the device should not be placed more than 3 to 4 feet away from you. Even at that distance, the results were abysmal.

The unfortunate truth is that the portable air conditioners on the market are mainly low-quality products imported from China. They’re purchased from Alibaba, rebranded, and sold with assistance from Amazon. In fact, many of these products are stored in Amazon’s warehouses and shipped by Amazon’s employees. So, it is easy to say that Amazon is somewhat complicit in the matter. 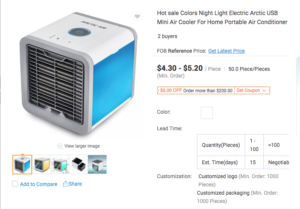 The same “Arctic Air” USB Mini Air Cooler can be purchased for $4.30 to $5.20 apiece on Alibaba. Furthermore, it can be customized with your logo of choice and packaging if you order 1000 air coolers. As you can see from the pictures we took from the portable AC we purchased, it isn’t designed to work great.

The computer fan isn’t strong enough to push out enough cool air. The water cooling system is ineffective too. A portable AC that looks identical to the Blaux Portable AC can be purchased on Alibaba for $12. Now, it is being sold online for more than $80.

The same can be said for the Williston Force AC and other alternatives. From our experience, these portable ACs aren’t worth more than $10 or $15. It is a good idea but the execution is poor.

Over the years, people have come to trust and respect Amazon. However, consumers have to be very cautious when purchasing items from Amazon and its 3rd party sellers. These portable air conditioners are just one of the many products designed to swindle American consumers and Amazon is complicit in the matter.

When searching for Portable USB Air Conditioners on Amazon, we find that many at the top of the list come with FREE Shipping by Amazon. The Fane Personal Air Cooler is being sold on Amazon for $40.99 by Billionward and Fulfilled by Amazon.

The exact same air conditioner is available on Alibaba for less than $14.00. Billionward is selling all products branded as Fane. Every one of this seller’s products is imported from China through Alibaba. The 2020 Spin Scrubber is available for $41.99 on Amazon but it is only $5.25 on Alibaba.

Furthermore, Billionward has received countless negative feedbacks on Amazon because the items they’re selling are bad. One customer says “This item is the worst”. Another says “Does not hold charge”. And another, “Item is not the brand and item is not even close to what the photo looked like.”

One seller states, “This item does not work very long if not plugged into a wall outlet of usb port as the battery doesn’t stay charged. Also it is no better than a regular portable fan. Not worth the $46.99 price! I would like to postage page return label.”

Billionward isn’t the only Amazon 3rd party seller engaged in such activity and Amazon knows it. How couldn’t it? Cygoodluck is doing the same with all of its products being branded as Swonuk. And another by the name of AUGOLA.

Again, the seller is buying all products from Alibaba, branding them with the AUGOLA name, and shipping them to Amazon so they can be warehoused and shipped. These 3rd party sellers are likely engaged in false reviews and other activities as well. 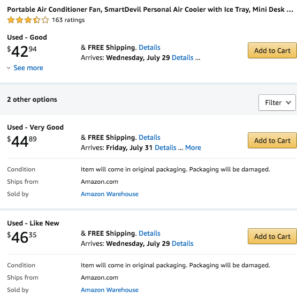 Sadly, Amazon is quickly ruining its reputation by allowing so many foreign 3rd party sellers to abuse American customers in this manner. The portable air conditioners are only one product being purchased from Alibaba, shipped to Amazon, and shipped by Amazon. When American consumers receive these products, they’re going to be disappointed and they’ll wonder why Amazon was selling it.

With so many customers sending these things back to Amazon, it is hard to believe that Amazon isn’t losing money as a result. It is even more frustrating and despicable that Amazon is selling these same products in its Amazon Warehouse deals. They’re “Used – Like New” for $37.99.

Truthfully, these “portable ACs” aren’t worth more than $10. The fact that Amazon has so many in its warehouse proves that people sent them back because they suck. Ours did. If you buy one, yours likely will as well. Furthermore, these products aren’t worth $80 or more.

If Amazon wants any credibility, it needs to remove these products from its site. They’re imported Chinese junk aiming to swindle American consumers. Since Amazon is profiting, storing, and shipping these items, it is complicit.

While these sites pretend to offer a satisfaction guarantee, they won’t honor it. They’re based outside of the United States so they have nothing to lose. Take our advice. Do yourself a favor. Avoid the headache and stay away from these scams. Until Amazon changes this, it is no better than Jack Ma’s Alibaba. It is complicit in 3rd party foreigners outside of the United States selling junk and abusing American consumers.

Amazon is constantly going after its 3rd party sellers but it is going after the wrong ones. Stop harassing American 3rd parties, stealing the buy box, and exposing their personal information. Amazon needs to do the right thing and shut down these Chinese scams before its reputation is left in tatters.