Crossover is a website that bridges the gap between job seekers and companies looking for good talent. The website promises higher pay for work-from-home positions, such as manual tester, software tester, software engineer, cloud operations engineer, software architect, and UX design lead. All of these jobs come with salaries that are too good to refuse.

Crossover claims to have a headquarters in Austin, Texas. This is about as much information as the website provides about its physical address. A business search via the Test Comptroller of Public Accounts website did not produce a Crossover for Work in Austin, Texas.

Crossover describes itself as an “Internet company” on its Facebook page. If you click on the comment under each post, you will see they are not visible. It appears most of the comments are filtered out for some reason. This is the first we encountered such on Facebook.

There is a Crossover Staffing Solutions in Desoto, Texas and Crossover 1463 Partners Ltd in Houston, Texas. There isn’t enough information on the website to determine if either of these companies are connected with Crossover For Work. 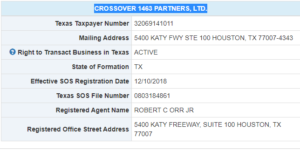 Crossover claims to have more than 3,500 partners in over 116 countries. A link to the list of partners did not produce a lot of results. The data provided was very limited if not sketchy.

According to several Quora members, Crossover is not such a great company to work for. Most of the website’s negative reviews revolve around some type of “spyware program.”. All employees are required to download the spyware to their computers, so Crossover can monitor their work patterns.

The website has definitely tried to hide its tracks. There are more than a few things about the site that draws red flags. The inaccessible physical address and phone number are just to name a few. All of the filtered Facebook comments and employee spyware program allegations are also fishy.

Nayzayerz recommends conducting in-depth research before applying with Crossover. The fact a sketchy company like Crossover has your personal information is enough to cause nightmares. Why would a company take hundreds of job seekers on long roller coaster rides just to tell them they do not qualify for the positions they applied for?