Getting involved in photography or videography can be exciting but expensive since you’re going to need new equipment. When working on a limited budget, you’ll likely stumble across a few companies you’ve never heard of and some of their products will look identical to that of their competitors.

Recently, the Chinese company Neewer has taken the industry by storm. Its products are quickly climbing Amazon’s rankings while YouTubers rush to review its latest products hoping to make some commission money along the way.

There is a shadiness surrounding Neewer that is difficult to describe and difficult to put your finger on. Whether knowingly or not, the company is linked to a scam that has been going on since 2006 or so. The scam is so complex it’ll make your head spin so buckle your seatbelt, take an Aspirin, and prepare to be befuddled. 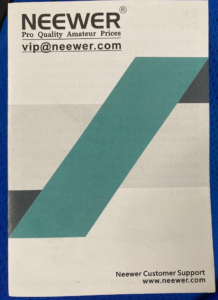 Newer is a Chinese-based company that markets or resells camera equipment, lighting, tripods, and accessories. According to its website, the multinational company was founded in 2010 and many of their products have become Amazon-certified best-sellers.

Its US counterpart Neewer is owned by Shenzen Neewer Technology Co. LTD which is based out of Guangdong, China. As for the US branch, the company is supposedly located at 95 Ethel Road Unit 3 in Edison, New Jersey. We’ve found two customer support phone numbers for the company including 732-623-9777 and 732-476-5436.

Is Lucas James Park a part of the company? Does it have anything to do with New Harbor or New Harbor Sales? 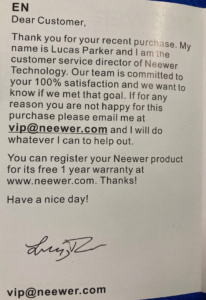 Where To Buy Neewer Products

Then, the company has an official store on Amazon. However, many of its products are sold by 3rd party sellers such as Global_omo, iTekLife, Photo Guard, KincaidGlobalTrade, and others. As for shipping, that is mostly handled by Amazon.

As an Amazon 3rd party seller, you have to get approval before listing and selling Neewer products on the platform. This often requires showing Amazon that you have permission from the company to do so or you can produce invoices showing you’ve ordered a pallet of items from the company.

Furthermore, there are countless Neewer branded products in Amazon’s Warehouse deals. This likely means they were damaged during shipping or returned by customers who didn’t like them. The company’s products are also sold on AliExpress and eBay. 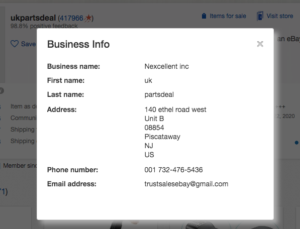 This is where things get really strange. There are at least two eBay stores selling most Neewer products and they’re using the company’s United States address and phone number. The first is ukpartsdeal which claims to be Nexcellent INC in Piscataway, New Jersey. The next is EmilyandLilly which also is located at the same address and uses the same phone number.

During our research, we also found an eBay user by the name of “eshopic” which appears to be linked to both. As for eshopic, that eBay user has received 0 feedback ratings in the past 12 months and appears to no longer sell on the platform.

On a side note, we all know eBay is overrun with Chinese sellers and most of them offer a bad service. During our search, we found eBay and Amazon “customer response” templates.

These are simple English copy-and-paste responses the Chinese seller can send to the American buyer. The picture includes one and there are hundreds on Baidu. Finally, one of these templates includes the email address for eshopic.

Not surprisingly, eshopic also sold Neewer products on eBay until all of the items were removed and the account went on vacation. Even stranger is the fact that it uses the same address as emilyandlily and UKPartsDeal. 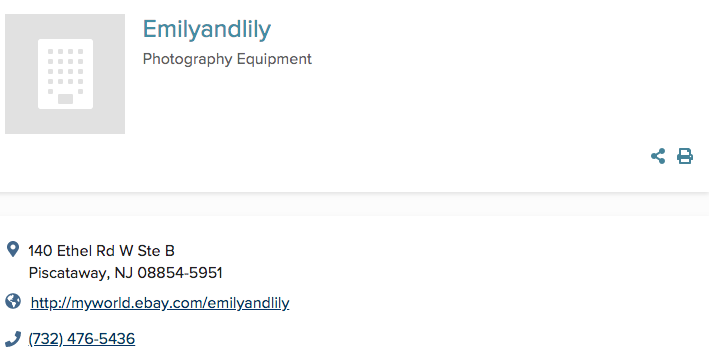 Finally, we come to the eBay sellers emilyandlily which may be the strangest culprit in the entire scheme. Today, emilyandlily is the primary eBay store to buy Neewer gear. Whether you’re looking for lights, tripods, filters, or something else, this seller has it and it has the Neewer models.

While we’ve contacted both for clarification, we haven’t received a response from either Neewer or emilyandlily. Nevertheless, there is something fishy going on here. The emilyandlily eBay store is designed to make it appear that emilyandlily and Neewer are one and the same while leaving some doubt.

Some American consumers suspect as much. Emilyandlily is not new to the rodeo. The eBay seller has been involved in alleged scams since 2003 or so. In March of 2007, Christopher Harold McCarthy of England contacted the Pittsburgh Post-Gazette and told them about potentially getting scammed by EmilyandLily on eBay.

The journalist with the Post-Gazette went to the company’s alleged 5001 Baum Boulevard address in Pittsburgh only to find out that there was no emilyandlily company there. While emilyandlily had a website called Emunion.com, it was doing business as Bidmall Inc. at the time.

Once the journalist entered Bidmall’s offices, he was introduced to a customer service representative named Jennifer Kramer. She pulled up a page showing that Christopher had purchased a refurbished camera but he claims it said new when he bought it. When the journalist left, he was contacted by a Jim Wang who claimed to be a Pittsburgh-based customer service manager for emilyandlily.

He denied that the company tried to deceive Christopher about the condition of the camera but agreed to give him at $95 refund. Sadly, the scam has not stopped. It has only gotten bigger. While it appears that Bidmall has apparently gone out of business, it was supposedly located at the same Piscataway address as the others.

In mid-2007, Bidmall Inc. was accused of retaliating, discharging, or disciplining an employee engaged in concerted activities. More about that can be found here.

Emilyandlily obviously did exceptionally well selling on eBay and hurting American consumers. The chart below details the 60-day sales of a small flash trigger in 2010. Emilyandlily was one of the top sellers and eshopic was right there with them. While they claim eshopic is based in the United States, this is likely not the case since the actual seller couldn’t form coherent English sentences and had to use the template mentioned above. 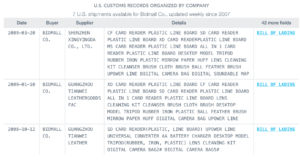 Unfortunately, the scam continues and hundreds of Americans will be abused as a result. eBay’s easy to rig rankings system is partly to blame. After all, a lot of eBay users will see that emilyandlily has been around for many years and their feedback scores are sky high.

Unfortunately, they likely won’t take the time to read the negative feedback and this could cost them dearly. By scanning through the store’s feedback, you can see that many buyers have never received their items. Others were given items that were used and refurbished when they thought they were buying something new. 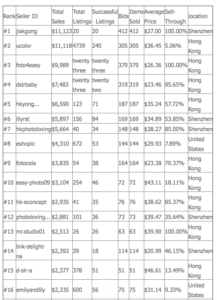 Furthermore, there is a good chance a lot of the positive feedback has been bought and paid for. Amazon further supports the scheme thanks to its warehousing service. There is no longer a need for emilyandlily or other sellers to purchase warehousing since Amazon does it for them. 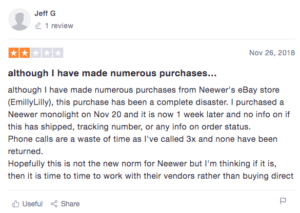 The biggest question for us is “Is Neewer Emilylily?” and vice versa. Neewer is selling cheap yet decent products at prices many will consider a bargain. Plus, it is selling stuff that most people can’t find elsewhere. Yes, these products are coming from China and it is untelling who is manufacturing them.

Emilyandlily has been engaged in shady activities for many years. Why would it have stopped now? If Neewer is emilyandlily, it is clear that neither company can be trusted. Maybe the company is unloading damaged goods or used products past customers sent back through the emilyandlily eBay store?

That would be deceitful. If Neewer wants to be a legitimate company that we can trust, it needs to address this issue. However, if it is emilyandlily, there is no way you can trust it. It is just too hard to trust the pamphlet which claims Lucas Parker is the company’s customer service director.