A lot of Americans are eager to lose weight so they’re turning to supplements and other products. This is where Bio X4 enters the picture. This product is being advertised by a 4-in-1 Weight Management Probiotic. Is this dietary supplement worth the money? Or, should you avoid it at all costs?

At the top of the website for Bio-X4, we find the name Nucific and the phone number 888-679-5520. That phone number leads us to Nucific.com and a BBB page for the company. On the BBB, the company has an A+ rating and more than 4 stars with 559 customer services. However, it has received 147 complaints in the last 3 years. 92 of those complaints were closed in the last 12 months.

On the website, it claims that Nucific Bio-X4 comes with a 90 day money back guarantee. One complaint says that the user bought three jars of PreBio Cleanse and the company did not want to honor the warranty because some of the bottles were used. The BBB complaint did the trick and Nucific did refund the full amount. Another says Nucific signed the customer up for a subscription service that they knew nothing about.

Again, Nucific canceled the membership and refunded the customer thanks to the BBB complaint. Finally, one consumer says BioX4 was just horrible and they did not have any results. After reaching out to the company within the 90-day return policy, they did not get a response.

This seems to be a common complaint. Nucific’s customer service is lacking causing customers to file BBB complaints to get problems resolved.

Nucific’s address is 19528 Ventura Blvd # 343 Tarzana, California 91356-2917. Unfortunately, that address directs to a UPS Store. So, whoever is running Nucific signed up for a UPS box and is doing business through that. There doesn’t seem to be a headquarters. Unfortunately, the website has no mention of where the products are actually made.

They could be made in a sweatshop in China for all we know. How can we trust Nucific supplements when we don’t know who is making them or what is in them? 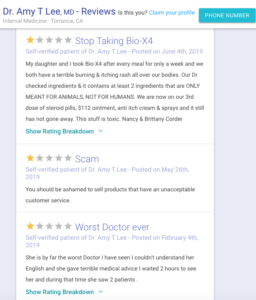 In 2018, a customer on BBB complained that Amy Lee stole her driver’s license. The complaint went unanswered and it is unknown if the patient ever got her license back. As for the American Board of Obesity Medicine, there is no member by the name of Amy Lee. On the website of the National Board of Physician Nutrition Specialists, there is no Amy Lee. 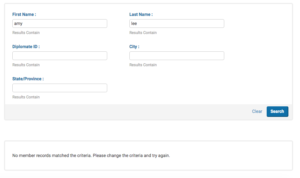 There is a Tsz Ying Lee though and that individual sees to be working in Los Angeles. Suffice to say, the Amy Lee in the Nucific videos does not appear to be Tsz Lee so we have to believe that she is not approved by the National Board of Physician Nutrition Specialists.

Should You Buy From Nucific?

Ultimately, we cannot recommend Nucific Bio-X4. The company has received far too many negative comments on their BBB page. However, it is good that the company has refunded those who’ve made BBB complaints. So, you will likely get your money back after jumping through multiple hoops. Still, most don’t want to go through that frustration.