With so many pollutants in the world, everyone wants to breathe in purified air. So, buying a personal air purifier may seem like a great idea and it could be. However, the world is also polluted with an abundance of scams so you have to be extra careful when purchasing such products. The Purify Pal is now advertising on Google’s search engine so you’ve likely heard about it.

Is it a good investment at nearly 70 bucks a piece? You’ll find out below.

When trying to find out more about PurifyPal, you won’t find much on the official website. The main page is lacking an address and phone number. On the shipping information page, we can see that the site owner is using 17Track.net to allow buyers to track their orders. This is very concerning since the tracking platform is often used by fraudulent companies.

We cannot find an address or phone number anywhere on the PurifyPal website. Instead, we’re told to contact the company using the email address purifypal@gmail.com. The Facebook page offers a different email, info@purifypal.com. As of August 12, PurifyPal has 0 ratings on Facebook. It seems that the page was created in late June so the scheme is just getting started.

There is a YouTube video created by someone advertising the product but it doesn’t offer much either. So, it is best to head to Alibaba to see if the same product can be found there.

Personally, we would cringe at the idea of buying something from Alibaba. The majority of these products go untested. So, they’re likely junk. If the same product is being sold on Alibaba, this means you’re dealing with a major scam. The PurifyPal is indeed available on Alibaba and the price difference is staggering.

On Alibaba, the negative ion generator mini portable wearable personal necklace is being sold for $13.99 to $12.49 by Shenzhen Yueh Young Industry Co. Ltd. On the low end, this individual is making $55.96 every time someone purchases a Purifypal for $69.96. Think about it for a second. There has to be a reason the purifier is only worth 13 bucks on Alibaba. 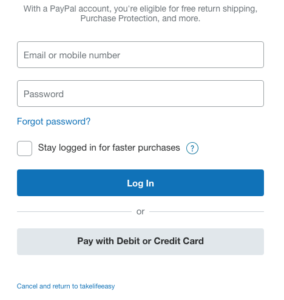 On the PurifyPal website, it says that the site is “Proudly American Owned”. We sincerely doubt that this is the case. When pretending to buy one of these necklaces through PayPal, we can see that the site owner is using a PayPal account named “takelifeeasy”. We can use this to further our investigation.

TakeLifeEasy was apparently the name of another online store. It too was used to scam others. On the Facebook page, a customer says they ordered two N-95 masks from the company and they never arrived. They wrote the customer saying they would arrive in 3 days but they never did and they’ve ignored the customer’s follow-up emails.

On March 7 of this year, another customer left feedback saying the same thing. They ordered masks and never got anything. That website, takelifeeasy.co.uk, is now gone. The scammer has likely moved on to selling the PurifyPal.

There is an Instagram account with TakeLifeEasy and a few UK-related products so they may be connected. It is clear that the user is not based in the United States. 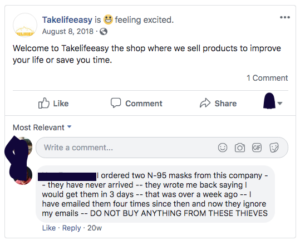 Finally, we land on the Pinterest page for PurifyPal and we find potentially misleading about our scammer. We find a potential phone number and the email address scottmbrookes@gmail.com. The Instagram account is using the same name Scott Brookes. We sincerely doubt that owner’s name is actually Scott Brookes unless he was incompetent and didn’t mind getting harassing in the future. Most of these scams are based outside of the United States from India, China, and elsewhere.

So, this information should be taken with a grain of salt.

If you were unfortunate enough to purchase something from PurifyPal, you were ripped off. These products aren’t worth 70 bucks since they’re being purchased for less than $15 and imported from China. If you were lucky, you received something but you likely didn’t. Well, you should start by filing a complaint with PayPal or your credit card company depending on your payment method.

Also, please note that this same product is being sold as the PuraSafe Wearable Air Purifier. And, we doubt ScottMBrookes is a real person linked to this project. The site says proudly American but Scott Brooks is in the UK. We believe the scammer is located somewhere in Asia or India. Either way, you should do yourself a favor and avoid these scams!