A lot of people have become hooked on Roblox. The online game was initially released in 2006. It gives people the opportunity to program a game and share it with others. Alternatively, you can play games created by other users. Roblox is available on various platforms including Windows, Xbox One, Android, iOS, macOS, and Fire OS.

Robloxfun.xyz is designed to manipulate people who want to obtain Roblox promo codes so they can acquire in-game virtual currency. If you don’t want to waste your time and energy, you’ll stay away from Robloxfun. It is one of the many websites pretending to offer free promo codes, in-game currency, and virtual currency for online games.

They’re not real. The only one benefiting from such websites is the creator since you’ll find yourself filling out surveys and applications hoping to get free promo codes. But, you’ll get nothing. Below, we’ll dig deeper into Robloxfun.xyz.

A lot of people heard about Robloxfun after a guy made a fake YouTube video claiming Charli D’ Amelio had been using the website. The “TikTok star” likely hasn’t since most people with a brain will quickly see that Robloxfun is a scam. Nevertheless, the fake video convinced a lot of people to head over to the website so they could check it out for themselves.

There is a good chance that a few tried to submit the application only to be forced to complete paid offers. Then, you likely clicked the X button and realized it was a scam.

When visiting Robloxfun.xyz, you’ll encounter a simple but effective system. Click on the “Claim Promo Code” and you’ll be asked to enter your username. The system really can’t verify your username. For instance, we’re going to insert GrannyLover109 and Robloxfun will proceed to the next step even though there is no Roblox account with the username GrannyLover109.

Despite this, the system miraculously found an account for the username grannylover109. Then, it pretends to show half of a promo code before we’re encouraged to activate the promo code.

From here, we have to complete two offers to prove we’re human. 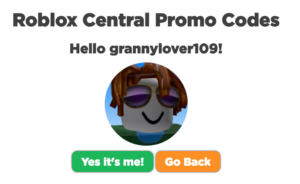 Even if the website was working, users would likely be required to pay for something before getting anything. This ensures that the creator of the website gets paid. If you continue trying to get promo codes from Robloxfun, you’re going to be stuck in a vicious cycle. 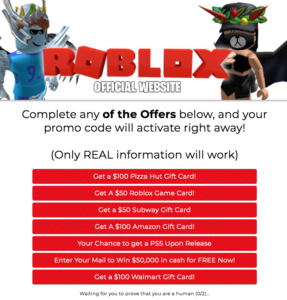 Ultimately, it is best to stay away from Robloxfun.zyx. Nobody is willing to give away free promo codes or in-game currency without getting something in return. The majority of websites are made with the intention of making money. This is what the owner of Robloxfun wishes to accomplish and they don’t care if the user gets anything or not.

So, you should stop wasting your time. Enjoy Roblox for free or pay money. With websites such as Robloxfun, you’ll only wait your time.