Stockx.com is an online auction platform that bridges the gap between designer shoe, handbag, and watch enthusiasts and sellers. The website was established by Dan Gilbert, founder of Quicken Loans, and Josh Luber in 2016.

TechCrunch reported on August 3, 2019, StockX.com had been hacked by an “unknown third party.” The company claimed the hacker or hackers gained access to specific customer data – name, username, password, physical address, and purchase history. The data breach allegedly exposed an estimated 6.8 million StockX accountholders’ personal data, according to the “Have I Been Pwned” website.

Multiple lawsuits alleging StockX failed to protect its customers’ personal data and misrepresented password updates as part of a system update were filed in the U.S. 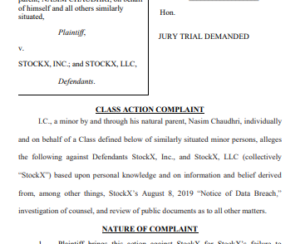 According to rumors, StockX hackers sold the stolen data on the dark web about $2 each. One of the victim’s personal information was utilized to purchase a pair of shoes for about $23,000.

While the company claims to have addressed the vulnerabilities in its online platform, hundreds of its customers have reached out to BBB. Complaints dating back to mid-2019, have been filed against StockX so far.

Some of the plaintiffs claimed they were victimized by the StockX hackers, others allege they purchased expensive designer shoes only to receive counterfeits. The company responded to one of the complaints saying customers have three days to contact the company about counterfeit claims.

According to the company’s policies, all shoes sold on its platform must undergo authentication verification by its employees before they are put on the market.

Counterfeit products run rampant on eBay, Amazon, StockX, and other online platforms. If you are concerned about this issue, it is recommended to not shop online unless you go through a brand website. Buying directly from the brand will allow you to avoid all the potential consumer scam risks.