When shopping on Amazon, there is a good chance that you’ve discovered nearly identical products. It could be a smart lock, night light, or Bluetooth speaker. Either way, you notice that the pictures are almost identical and the product’s specifications are nearly the same. You struggle to find out which product is the best of the bunch. There may be two, three, five, or ten of these same products making it difficult for legitimate companies to shine light on their products.

The sad truth is that Amazon’s marketplace is loaded with crap. Most of that crap was made in China, rebranded, and sold on Amazon to unsuspecting American consumers. More about the Alibaba to Amazon scam can be found below.

How To Sell On Amazon From Alibaba

So, you want to create your own Amazon business? Well, you don’t need a warehouse or manufacturing facility. Instead, you can rely on two of the most complicit companies in the world, Amazon and Alibaba. First, you’ll want to head over to Alibaba and begin looking for products you think buyers may like. Once you’ve done that, you’ll want to order 20, 50, or 200 of the items before shipping them to Amazon and listing them on Amazon’s marketplace.

There is no need for warehouse space since Amazon will store it and ship it for you. As an example for this article, we’re going to look at the “Bluetooth nightlight”. This is just one of the many products that is being mass produced, rebranded by an average Joe, and sold on Amazon’s marketplace. 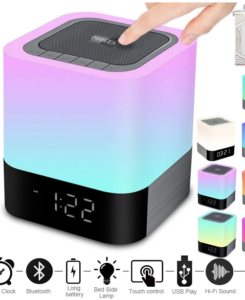 On Alibaba, you can buy 50 Colorful LED Bluetooth Night Light Speakers at $13.68 each. However, there are some tricks with Alibaba. Add the item to your cart and leave it for a week. The seller will contact you offering a discount. Or, you can try directly haggling with the manufacturer. Either way, you’ll likely pay a lot less than the advertised price.

Since the items are being shipped from China, you’ll have to pay tariffs and such. Thanks to Trump, tariffs on lots of Chinese junk like this are climbing significantly higher and it is one of the main reasons Jeff Bezos throws darts at a picture of Donald Trump every night. Love him or hate him, Donald Trump is hurting Amazon and its Chinese resellers.

After a few weeks or months, your Colorful LED Bluetooth Nightlights will arrive and you’ll be ready to sell them. Depending on your initial decision, you may need to send them to Amazon’s warehouse so they can store the Chinese trash and ship it for you. Either way, most Amazon Chinese junk dealers allow Amazon to handle shipping because most are not even located in the United States.

Then, you’ll want to list your item on the Amazon marketplace. As you can see from the pictures, you’re going to have a lot of competition with the Bluetooth Speaker Nightlight. These products are supposedly manufactured by WamGra, Gallstep, and POBEES. However, we know from Alibaba that the items were manufactured by the Shanghai Kaiji Lightning Technology Trading Company.

It would be untruthful to say all Chinese-made products are junk. This is obviously not the case since many leading brands including GoPro, Apple, and others manufacture their products in China. However, Alibaba is home to the junkiest junk so it likely isn’t going to last. When reading Amazon reviews, you really have to ignore most of them because they were bought and paid for by the seller.

Instead, it is best to focus on the 3-star reviews and lower. When doing that, we can see that the Chinese Bluetooth night light speaker is not going to last. The reviews say, “it has now been four months and the color-changing lights have shorted out”, “the foreign instructions are not easy to understand”, “the player battery stopped working after a month”, “This one died after 4 months”, “Light function stopped working after less than a week”.

When reading seller feedback for these individuals, we can see that Amazon is complicit. One customer left feedback for Pobees which is selling multiple Chinese-made products, “Garbage product – broke after a month. Seriously???”

Unfortunately, Amazon decided to take the blame by saying it fulfilled the item and it took responsibility for the fulfillment experience. What? A garbage product is a garbage product and that has nothing with the shipping process. 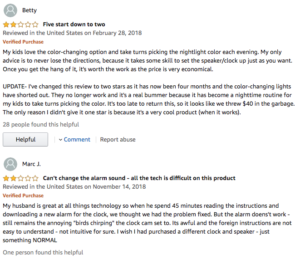 What Consumers Need To Do

When searching Amazon, it is easy to find the junk that has been imported from China and rebranded. It is pertinent to be very careful when buying these products. If you’re not in a hurry, you should save yourself some money by buying directly from AliExpress.

As you can see from the pictures, the same item is available for $14.71 and $6.32 shipping. So, you can save nearly $20 by purchasing the same item from AliExpress. When buying it from Amazon, you’re funneling money to China anyway. Plus, you’ll get your money back if the item isn’t delivered before 9/4.

Unfortunately, Amazon is overloaded with these Chinese knockoffs, counterfeits, and rebranded items. So, it is wise to do your research and make sure that you don’t fall for the scam. It is far too late and valuable to remedy this problem with any half-baked idea such as the formation of a Counterfeit Crimes Unit.