One doesn’t have to look long on Amazon to run into yet another potential scam. This time, it has the glitz and glamour of Hollywood or maybe not. Shark Tank ran 11 seasons with more than 240 episodes in total. During those 240 some episodes, there has never been an episode featuring KETO supplements. Unfortunately, a lot of people will buy anything that has been on television and this is why the creators of the Ultra Fast Keto Boost supplements pretended their product was featured on an episode of Shark Tank.

Despite, no Keto-based product ever being pictured or funded on the hit television show, some shady individuals decided to use the rumor to their advantage. PureFit KETO was one of the most successful. This “company” marketed its product by claiming it has been successfully pitched on Shark Tank and Amazon allowed it.

After an investigation, the Better Business Bureau found that the images on PureFit KETO’s website were taken from an episode of Shark Tank and that episode never mentioned PureFit KETO. And, you can tell how popular it was by looking at Amazon’s auto-generated search terms.

Put in Keto Shark and you’ll see a bunch of related terms. Amazon and the shady people behind the scam likely benefited greatly while consumers were taken for a ride. But, the moral of the story is that there is no KETO supplement that has been on Shark Tank. 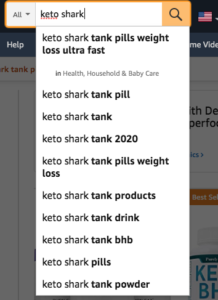 Again, Shark Tank has never featured a KETO diet pill or supplement. Still, Amazon doesn’t seem to mind that its 3rd party sellers are taking advantage of this blatant lie. Even in the Q&A section of these products, people are asking if they’re buying the KETO supplements that were featured on Shark Tank.

Sadly, Amazon has allowed countless shady supplements to be sold on its website and there is a good chance that they’re supported by bogus reviews. The original scam was discovered in 2019 but the scam continues today and much of that should be credited to Amazon. 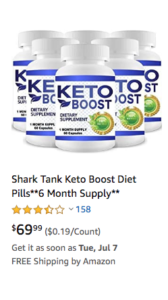 Is Keto Boost a scam?

It is hard to say whether Ultra Fast Keto Boost is a scam. However, it isn’t good that consumers seriously believe these products were featured on Shark Tank when they were not. Anyone who bought these products and feel they were wronged should fight back again Amazon and the 3rd part sellers involved in this scam.

Since the pills remain on Amazon’s marketplace without clarification, Amazon is complicit in the scam. Therefore, we highly recommend filing BBB complaints against Amazon if you bought a KETO supplement believing it was featured on Shark Tank. Furthermore, you can file a complaint with the FTC.

You were the victim of false advertising and deserve to be compensated. Also, be sure to tells us about your story on the NayZayerz forums.