Amazon started as a book store before quickly adding a variety of items to its inventory. Today, the e-commerce giant has everything from A to Z under its umbrella and books have taken a backseat. After constant battles with publishers and small book stores, Amazon emerged unscathed leaving it the lone survivor with little competition.

Amazon has evolved from the days when books were only $0.99 a piece and a few bucks for media mail shipping. The playing field is stacked against the seller as consumers watch Amazon’s book prices climb progressively higher. Unsuspecting consumers who’ve purchased from Amazon may one day find their books gone, missing without a trace or an explanation.

It is never a good idea to buy books on Amazon. You’ll find out why below. 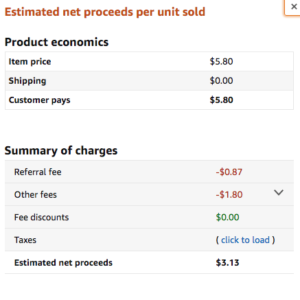 Have you noticed that Amazon’s book prices have gotten significantly higher in the past few years? Didn’t you love the days when you could buy each book for a measly 99 cents? Thanks to Amazon’s new policies, those days are gone. And, like everything else on the company’s marketplace, the prices are rapidly increasing.

In recent years, Amazon has changed its book seller fees to make it more difficult for sellers to sell cheap books. It is no longer feasible to sell a book for 99 cents and 3 or 4 dollars for shipping. Why? Well, Amazon charges 15% for all book sales and an extra $1.80 closing fee.

Please take a look at this example. We’re trying to sell a book on Amazon for $5.80. It is older and slightly damaged. Honestly, the book is likely worth a few dollars less. Nevertheless, Amazon is charging a $0.87 referral fee and a $1.80 closing fee.

For this specific title, you’ll receive $3.13 before shipping.

Media mail is not cheap. With a little luck, you’ll pay $2.90 for shipping via media mail and you’ll make 20 cents. However, media mail is often higher and the seller will most likely lose money on this sale.

As a result, most Amazon sellers refuse to sell books lower than $8 because they’ll lose money doing so. This doesn’t even taken into consideration the monthly fees and shipping commission fees sellers are being charged.

Selling books on Amazon is barely feasible anymore unless you’re willing to list the books for $10 or much higher. These sellers will complain on Amazon’s Seller Forums where they’ll get snarky comments from Amazon’s blind followers.

What about the Kindle versions of the book? A lot of people like the feel of having a hardback book resting in their hands as they flip through the pages. Thanks to the launch of the Amazon Kindle many years ago, the company has tried to shift from physical book sales to digital book sales and this too has harmed customers and 3rd party sellers.

While browsing Amazon’s books, we stumbled across Above Suspicion: An Undercover FBI Agent, an Illicit Affair, and a Murder of Passion. As someone who can’t get enough true crime content, we decided to check it out. For mobile phone users, the hardback and paperback options are hidden making it seem that there are none available.

When enlarging the browser, we can finally see the alternative options. Nevertheless, the lowest price for a hardback copy is over $13. For someone using a smartphone, you’ll likely never see these options though.

As for the Kindle version, it is $8.99. What are the prices elsewhere? On eBay, we can buy the same digital book in PDF, Mobi, and ePub version for $6.99. Plus, there is a big difference between this and what Amazon is offering. 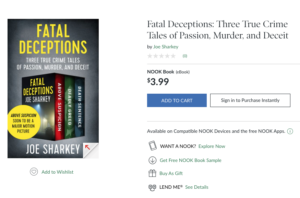 Furthermore, we can get the same offering at Barnes & Noble for much, much cheaper. On that website, you can get Joe Sharkey’s Above Suspicion, Deadly Greed, and Death Sentence for just $3.99 but you’ll need a Nook.

Finally, it should be noted that Kindle books are not permanent. They can be deleted at any point by you or Amazon. In July of 2009, Amazon discovered that George Orwell’s 1984 had been uploaded to its Kindle store by a company that did not own the rights to the book. Amazon swiftly pulled the e-book from its site while remotely deleting copies from customers’ Kindles.

Amazon did refund the purchase price but the experience left a bad taste in the mouths of consumers. Some argued that they felt violated and described it as Amazon coming into their homes and removing the book from their shelves before leaving a few dollars behind.

As a result, 17-year-old Justin D. Gawronski decided to fight back filing a class-action lawsuit against the company. He contended that Amazon violated its Terms of Service, illegally hacked into Kindle devices, and caused him particular damage because he had been keeping notes on the book as a part of a summer school assignment and those were deleted as well.

Jeff Bezo would later call the company’s actions “stupid” and that is an understatement. Until that point, most people did not know that Amazon “possessed the technological ability or right to remotely delete digital content purchased through the Kindle Store.” Then, a thief came in the night and stole the books without leaving a shred of evidence.

Amazon promised it would never erase books again unless ordered by the state to do so but it would not stay true to its word. It happened again in 2012 and it’ll likely happen again in the future.

Ultimately, buying books or e-books from Amazon is a bad idea. Prices have been inflated thanks to Amazon’s referral and closing fees. The prices tend to be cheaper on other platforms including eBay. Most of these books are not fulfilled by Amazon so your Prime membership won’t help.

Buying Kindle books is even crazier. The prices again are outrageous with Nook alternatives often being far cheaper. eBay prices are cheaper and you can keep the book, move it to your Kindle, or whatever. With Kindle books, your purchases may be ripped from your digital storage in the blink of an eye for one reason or another.

It is best to buy books elsewhere because Amazon offers little security and their prices are too expensive.