Zumper is a website with the mission to make renting a seamless and stress-free experience for everyone involved. According to its website, the company has offices across the country with one located in San Francisco, Chicago, New York City, Providence, and Scottsdale.

Furthermore, it claims to be based in San Francisco and raised $90 million in venture capital funding to date. While it sounds good, one has to wonder if Zumper can live up to the hype. Are there countless Zumper scams that will drive consumers away from the site? Or, is it a legitimate, honest to goodness company?

Who Is Zumper Inc?

Zumper claims to be the easiest way to search for apartments to rent. Users can apply for listings they’re interested in while posting their rental properties. It claims to offer numerous services including tenant screening, property listings online, and rent collection services. According to the last business registration information from the California Secretary of State, Zumper Inc. was registered on 7/11/2012. 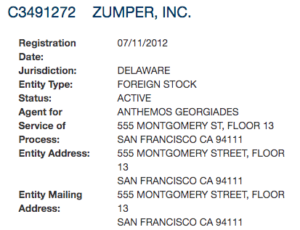 By all accounts, Zumper is indeed a registered business. The company owns and runs PadMapper Inc. which was founded in 2010.

In June of 2015, it was announced that PadMapper, 3Taps, and Craiglist had ended their 3-year legal fight. PadMapper and 3Taps agreed to stop using classified ad data from Craigslist on their own sites. It was revealed that PadMapper republished Craiglist apartment listings over a map making it possible for users to view the listing geographically. PadMapper and 3Taps were sued in 2012 with Craigslist invoking a variety of laws including copyright and the Computer Fraud and Abuse Act.

So, we can assume that few, if any, people are actually adding listings to PadMapper or Zumper. Instead, PadMapper is aggregating or collecting listings from elsewhere and putting them into a convenient pile for users to shift through. Zumper is likely doing the same. 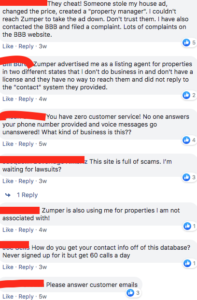 Zumper And The Big Mix Ups

On the surface, Zumper seems to be a real company. It is registered in two states and with the SEC. Nevertheless, this doesn’t mean that its business practices are perfect. Unfortunately, it seems that Zumper has created a big problem for itself by creating rental properties, listing them, and using information belonging to agents who know nothing about it. These individuals aren’t connected to the properties or Zumper.

According to countless Facebook complaints, Zumper is advertising listings using listing agents that have nothing to do with the properties. Some agents are incorrectly connected to properties in states where they’re not licensed. In fact, most of the comments on Zumper’s Facebook page are people complaining about the company being a scam and having scam listings.

On one post, CEO and co-founder Anthemos Georgiades left a heart emoji. He was promptly belittled by angry agents. “If this is a real company, you’d best explain why you’re using innocent people’s unlisted phone numbers as “randomized” numbers on your (bogus?) listings.” Others encourage each other to file a lawsuit against the “scam enabler company”.

One commenter found a solution to the problem. “I’ve started sending all the scam ads I come across back to them and they get taken down pretty quickly”. 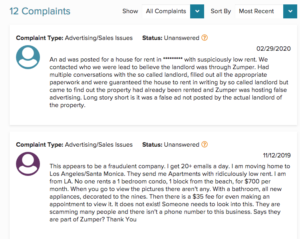 Zumper may be convincing investors to hand over their money but it is not doing a good job helping consumers. There are 12 complaints against Zumper with the Better Business Bureau and the company hasn’t responded to a single one of them. On Indeed, a former Zumper market specialist from Atlanta, Georgia claims the company cares more about its investors than its employees.

Sadly, it seems it cares more about investors than customers too.

As for Zumper, it ranks 8,921 globally and 1,954 in the United States. While the website might become a success in the future, it isn’t right now.

Zumper is a legitimate company. Some may even have success while using Zumper. Nevertheless, there are way too many complaints for us to recommend it. It doesn’t help that these complaints have never been addressed by the company. None of the BBB complaints has been answered and that is not a good look for the company.

There are far better and more reliable alternatives including Zillow and Realtor.com. Even Craigslist as shady as it can be has a stronger following. Zumper may transform into something big one day but it will never do that until it proves it cares about its customers and its reputation. It should start by cleaning up the false listings on its website.

The Nayzayerz forums are open to agents who wish to leave complaints about Zumper.